The following content is intended for mature audiences and may contain sexual themes, gore, violence and/or strong language. Discretion is advised.

Glasses go on. Hair gets pulled back. Head explodes.

I wanna read it but i'm afraid i cant stomach the death scenes, I mean I'm not a weak kind of guy when it comes to gore, I even enjoyed Alucard killing his enemies and the Nazi vampires eating people of london but when I came to the video of the death scene of the red girl i felt like hurling

And with this last extra chapter, they made the connection that were missing:

The Anime;
The Rebuild movies!

The three stories interlace, but every and each has a different final route, as alternative universe.

Man that was pretty good, I admit I was bummed by how tragic alot of it was and that there wasn't that much romance. But it was still an interesting read that hooked me till the end. Speaking of the end though, my head hurts, all that stuff was way over me. Ending wasn't bad, not as good as I was hoping, but it was pretty satisfying. Again I find myself questioning why I took so long to read a series I'd heard about for so long.

And it's Preordered! Finally the final book to end the collection!

There are more movies of evangelion as well, some are quite recent

What are they about?

Well the first one I mentioned is pretty much like the anime with some alterations and Shinji's disappearance at the end...

The second one I mentioned?

Well, 15 years after "you can not advance", Shinji finally comes back, everyone hates him and he goes full retard (again)

Well, then it turns out that at the end of the previous movie, when he attempted to get Rei out of some sort of angel core he actually triggered the third impact, or in other words: he killed most humans on the planet

How does the movie go then?

Well, a lot of talking, confusion, some fighting, people hating Shinji (telling him "it is all your fault" but never telling him wtf happened), then him finding out...

Shinji: "It was your idea"-->does it regardless

Well, they somehow managed to stop it at the last moment but still, that brat never learns from his mistakes, no matter how huge and obvious the mistakes are

10/10 ending. I would suck it over the ``I feel disgusted'' bullshite Anno pulled out of his ass in EoE.

Well, I watched the anime and all I gotta say is:

Asuka, if you say you come from germany, then make it sound as if you ACTUALLY know German!!!

It really did hurt:

Japanese language and all perfect, despite coming from Germany (the character), but pathetic pronounination (Das geht doch nicht)

Is it that big a deal? I don't really mind hearing English characters supiikingu raiku dissu. I suppose it's both a matter of getting used to it, and personal preferences lol.

Well, I watched the anime and all I gotta say is:

Asuka, if you say you come from germany, then make it sound as if you ACTUALLY know German!!!

It really did hurt:

Japanese language and all perfect, despite coming from Germany (the character), but pathetic pronounination (Das geht doch nicht)

would've been nice if asuka had seen shinji before she was dissolved.

Just read the last story. I'm in denial. At first I thought it was a joke. But I don't really know what to say now. I have mix feeling about it.

So, it's really the end?

can somebody translate Ch.95: Thank you ∞ Goodbye

Missing the chapter numbered "91.2: To Where the Light Returns" on other sites.

I prefer this ending over the end of evangelion movie version. Unlike the movie version you are not left wondering if whether or not the main character still remembered what he learned inside of the god angel thing because of the whole chocking asuka thing.

Oh my, never woulda thought, Evangelion with a happy ending. Makes me all warm and fuzzy inside.

Can someone tell me if theres a page or thread with all the chapters?

Dunno how to feel about this. Makes me feel better after 3.0 though. 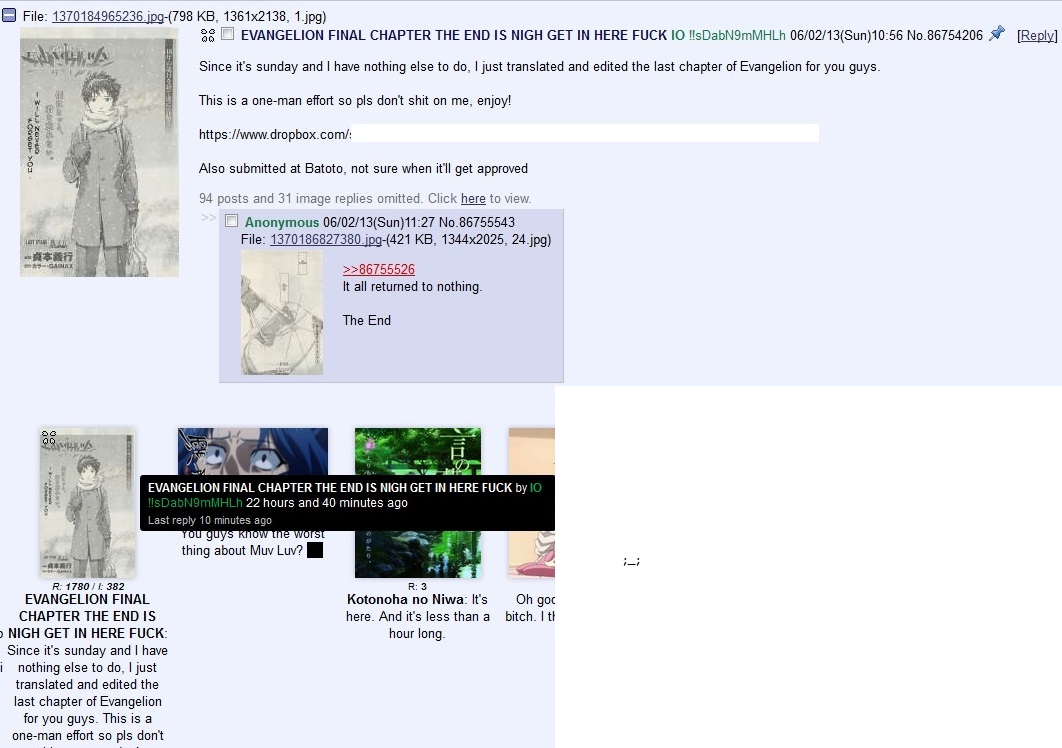 Are you talking about Suicide Island? http://vatoto.com/comic/_/comics/suicide-island-r486 Or one of the other dark anime?

i remember watching neon genesis back when i was a little kid, i remember how backwards as fuck disturbing this fucking shit is.... it was awesome