"Bungaku Shoujo" to Shinitagari no Pierrot 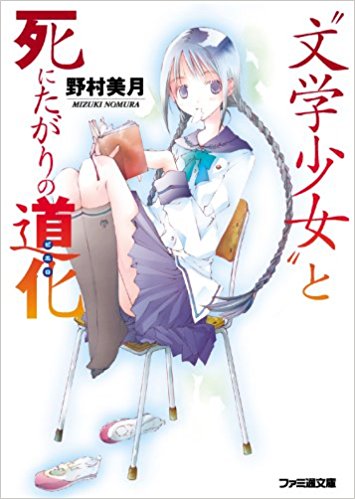 The following content is intended for mature audiences and may contain sexual themes, gore, violence and/or strong language. Discretion is advised.

It's very good! Didn't expect it, really. Tbh, up until half of the series, I thought Tooko is literary literature-eater-ghost who possessed the club.

Spoiler
However, I found the existence of the tsundere girl is annoying and unimportant (at least in this series).

Spoiler
pretty much everyone

(even though a the mixing between reality and perspective and letter content confused me a LOT in the beginning, it wrapped it all up at the end. Makes for a VERY touching story.)

It's a fairly good read. I enjoyed the numerous references to different authors, both local (Japanese) and foreign (the Gallico reference tickled me silly because he is one of my favorite authors). The drawings are kind of raw, but it's okay. I enjoyed some of the whimsical sequences and the sudden changes in perspective...but on occasion it could be jarring and confusing. Perhaps it is the style of the author, but I believe it would have been better had she alternated the

Spoiler
contents of the letter and the actual reality.
That way the flow would've been smoother. Another issue for me is the fact that all that after all that build up, the plot turned out to be incredibly simple in the end...so simple it was almost fantastic. Even the supposed climax ended too quickly, almost with a razor-knife precision.

The main characters themselves aren't as fleshed out as I wanted them to be. So much mystery remains regarding the

Spoiler
Literary girl, like is she really a youkai, or is her eating books only a metaphor? What about the MC's past...who really was Miu to him, and why did she kill herself?
These characters though interesting remained raw uncut gems, and so it was quite difficult to get emotionally invested in them and in the story.

Overall, though, it kind of reminded me of a less polished version of H. Murakami's works. I appreciated the artists portrayal of a psychopathic mindset though, and of depression, and how old seemingly thoughtless actions can lead to so much regret.

This manga's really nice, but I'm not that big a fan of the art, and the original novel is better. This seems a bit less serious than the novel, and Konoha seems kinda different in either form.

It's still Bungaku Shoujo though, so I can't really complain. ^^

an amazing read, don't pass on this one!

The manga doesn't go in any direction you might think it would go based on the introduction. It seems chaotic and random until the end, and even then feels a bit unsettling.

tehehehe... i don't know whether to laugh or be sad... but i guess laugh won.. cause i LOL'ed anyways... thanks to Tooko senpai!! hehehehehe

Haha, it was interesting. I couldn't stop midway and read throug the end in one full swep

Jan 02 2013 09:13 AM
I'm actually at a loss for words to describe how much I enjoyed this. It is quite an incredible story and I hope that it continues for a very long time.

Dec 13 2012 12:20 AM
This story is so incredibly Japanese, boring into the very soul of those tormented teenagers. There really is a culture gap - and mangas allowing to cross that gap aren't numerous.

I'm glad I read it, basically

Nov 04 2012 08:33 PM
Hopefully sequel gets translated completely soon. This feels unfinished, as it doesn't tell anything about Konohas past.

Oct 30 2012 04:31 PM
Ok, I'll admit that the mystery itself lost my interest at some point. It in and of itself was nothing special.
But the characters here were amazing. Surprisingly rich and deep characters, with brightness and intensity to them. They sucked me in and trapped me in their personalities. I couldn't stop reading.
Wonderful stuff.

Dec 16 2011 10:10 PM
Unexpectedly good mystery, I got lost a few times in it. Just needs more "Would have gotten away with it if it weren't for those meddling kids!" lines.